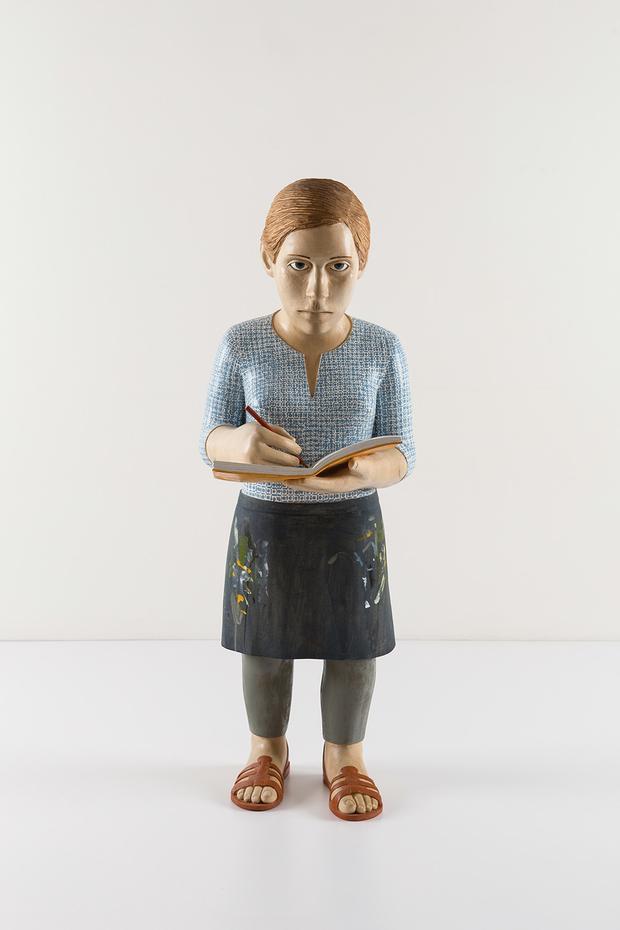 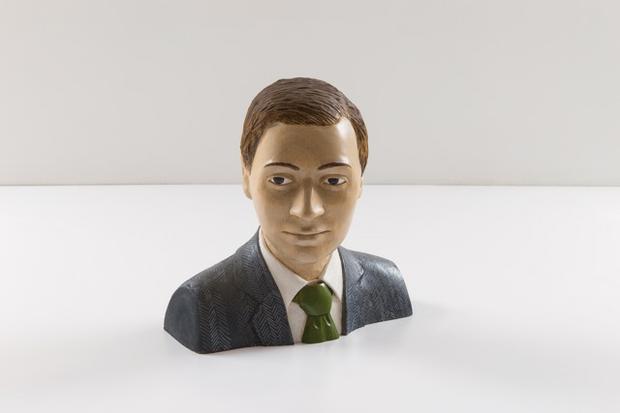 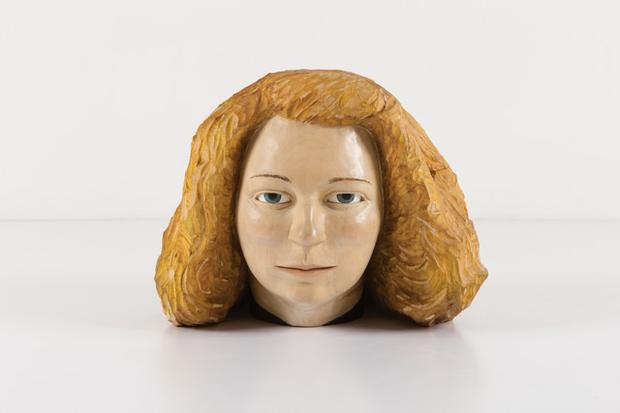 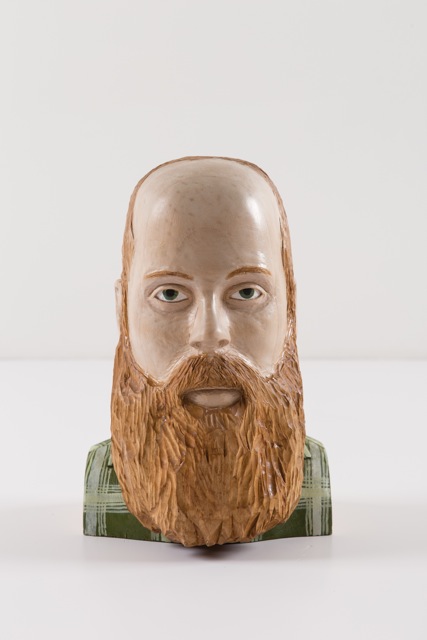 Jack Shainman Gallery is pleased to present Claudette Schreuders’ fifth solo exhibition with the gallery, whose intimately scaled lithographs and sculptures speak to the ambiguities of the search for a South African identity in the post-apartheid era. Featuring a new group of painted and carved busts, Note to Self reflects the artist’s diverse trove of personal and creative touchstones. The resulting body of work is both a tribute to these influences, as well as an opportunity to explore the uncanny intricacies of portraiture in wood.

The titular work of the exhibition depicts the artist standing, a paint-splattered apron tied around her waist, a sketchbook and pencil in hand. Her face looks out past the viewer, as if to pause between thoughts or summon inspiration from the well of individuals behind her, which include the musician Bonnie ‘Prince’ Billy, the painters Alice Neel, Balthus, and Paula Modersohn Becker, and several family members. Note to Self, 2015 is grounded firmly on the floor, while the menagerie of faces float on pedestals of varying heights, a retinue of inspiration made manifest from the annals of memory and creativity.

Balthus’ presence in the exhibition extends beyond the wooden likeness of him. Known for depicting domestic interiors and dreamlike nudes, he is a clear artistic predecessor, infusing Scheuders’ soft lines and delicate portraits. The 20th-century French painter’s presence is perhaps most explicitly felt in representations of full figures. The diminutive Loved Ones, 2012, a girl, nude except for a blue school uniform skirt and grey sandals, formally alludes to Balthus’ painting, Young Girl with White Skirt, 1955, while her big brown eyes reveal an inner complexity. Lithographs (such as Mirror, 2015, a take on Balthus’ Nude Before a Mirror, 1955) document poignant bodies, dense and round. Their unselfconscious imperfection renders them vulnerable.

The appearance of fellow South Africans, Marlene Dumas, Bessie Head, Anton Kannemeyer, Nelson Mandela, and Brett Murray, shed further light on the genesis of the artist’s unique biography, born to Dutch parents in Pretoria. The amalgam of individuals underscores a long-held interest in how the fabric of a place shapes a person:

It’s portraiture, but it’s a vehicle for telling a particular story, or the way in which society makes people who they are, or the group against the individual. As soon as you make a figure, it has an identity…

For Schreuders, a single portrait alludes to the particular web of individuals who impact the person represented. If the staggered installation of wood figures brings to mind the famous exaltation, “be bold and mighty forces will come to your aid,” the exhibition as a whole is a deeply personal portrait of the artist, annotated with the people and relationships that made the physical work in the gallery space possible. Note to Self encourages us to cite our influences proudly, and most importantly, to keep them close.

Born in 1973 in Pretoria, South Africa, Claudette Schreuders now lives and works in Cape Town. Her work is featured in collections around the world, with a strong presence in major New York City institutions, including both the Metropolitan Museum of Art and the Museum of Modern Art, where a suite of her lithographs were part of Impressions from South Africa, 1965 to Now in 2011.

Concurrently on view is Of a Different Nature, featuring the work of El Anatsui, Bernd and Hilla Becher, and Maya Lin at 513 West 20th Street and a group exhibition, Winter in America, at The School in Kinderhook, NY. Upcoming exhibitions include Barkley L. Hendricks at our 24th Street gallery and Malick Sidibé at 20th Street, both opening March 17, 2016. Gallery hours are Tuesday through Saturday from 10am to 6pm. For additional information and photographic material, please contact the gallery at info@jackshainman.com.